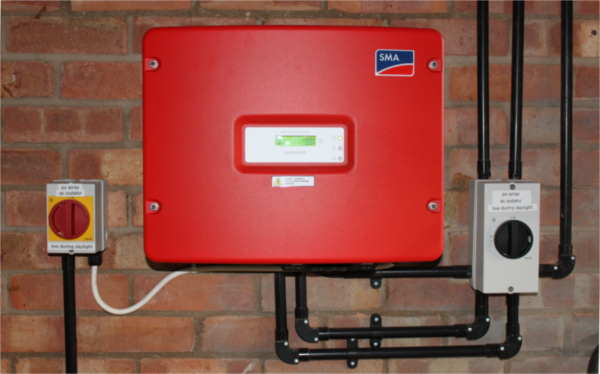 An inverter is an electrical device that converts direct current (DC) to alternating current (AC); the converted AC can be at any required voltage and frequency with the use of appropriate transformers, switching, and control circuits. Solid-state inverters have no moving parts and are used in a wide range of applications, from small switching power supplies in computers, to large electric utility high-voltage direct current applications that transport bulk power. Inverters are commonly used to supply AC power from DC sources such as solar panels or batteries. The inverter performs the opposite function of a rectifier.

The output of a modified sine wave inverter is similar to a square wave output except that the output goes to zero volts for a time before switching positive or negative. It is simple and low cost (~$0.10USD/Watt) and is compatible with most electronic devices, except for sensitive or specialized equipment, for example certain laser printers, fluorescent lighting, audio equipment. Most AC motors will run off this power source albeit at a reduction in efficiency of approximately 20%

A pure sine wave inverter produces a nearly perfect sine wave output (<3% total harmonic distortion) that is essentially the same as utility-supplied grid power. Thus it is compatible with all AC electronic devices. This is the type used in grid-tie inverters. Its design is more complex, and costs more per unit power. The electrical inverter is a high-power electronic oscillator. It is so named because early mechanical AC to DC converters were made to work in reverse, and thus were "inverted", to convert DC to AC.

A grid tie inverter is a sine wave inverter designed to inject electricity into the electric power distribution system. Such inverters must synchronise with the frequency of the grid. They usually contain one or more Maximum power point tracking features to extract the maximum amount of power, and also include safety features.