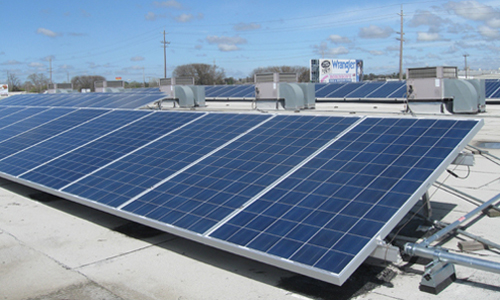 Solar Cells produce direct current electricity from sun light, which can be used to power equipment or to recharge a battery. The first practical application of photovoltaics was to power orbiting satellites and other spacecraft, but today the majority of photovoltaic modules are used for grid connected power generation. In this case an inverter is required to convert the DC to AC. There is a smaller market for off-grid power for remote dwellings, boats, recreational vehicles, electric cars, roadside emergency telephones, remote sensing, and cathodic protection of pipelines.

Photovoltaic (PV) cells are formed from a wafer of semi-conductor material and although there are now several types in production using different materials, the most common semi-conductor used is silicon. Pure crystalline silicon is a poor electrical conductor but treat it with tiny quantities of an impurity, either phosphorous or arsenic (a process called "doping") and enough electrons of these materials are freed to enable a current to pass through. Electrons are negatively charged so this type of silicon is called N-Type. Dope silicon with gallium or boron and "holes" are created in the crystalline lattice where a silicon electron has nothing to bond with. These holes can conduct electrical current and the lack of an electron creates a positive charge so this type of silicon is therefore called P-Type.

Both types of silicon are modest electrical conductors, hence the name semiconductors. Put a layer of each kind together in a wafer, such as in a PV cell, and the free electrons in the N side migrate towards the free holes on the P side. This causes a disruption to the electrical neutrality where the holes and electrons mix at the junction of the two layers. Eventually a barrier is formed preventing the electrons from crossing to the P side and an electrical field is formed, separating both sides.

This electrical field acts as a diode, allowing electrons to pass from the P side to the N side, but not vice versa. Expose the cell to light, and the energy from each photon (light particle) hitting the silicon, will liberate an electron and a corresponding hole. If this happens within range of the electric field's influence, the electrons will be sent to the N side and the holes to the P one, resulting in yet further disruption of electrical neutrality. Apply an external pathway connecting both sides of the silicon wafer and electrons will flow back to their original P side to unite with the holes sent there by the electric field. This flow of electrons is a current; the electrical field in the cell causes a voltage and the product of these two is power. Several factors affect the efficiency of a solar cell. Some cells, mainly ones made from a single material, are only efficient in certain light wavelengths.

Single material cells can at the very most expect to convert about 25% of the light hitting it to electrical power. Research is ongoing into multi-junction cells combining two or more different materials in a single cell. These can have a theoretical efficiency of up to 70% but the cells are problematical in that too many layers can put the crystals under too much strain. The most efficient multi-junction cell so far has attained a 30% efficiency with just two layers. A recent encouraging discovery has found that alloys of indium gallium nitride have the potential to convert the full light spectrum to electrical power with the added bonus that they could also be very cheap to produce. 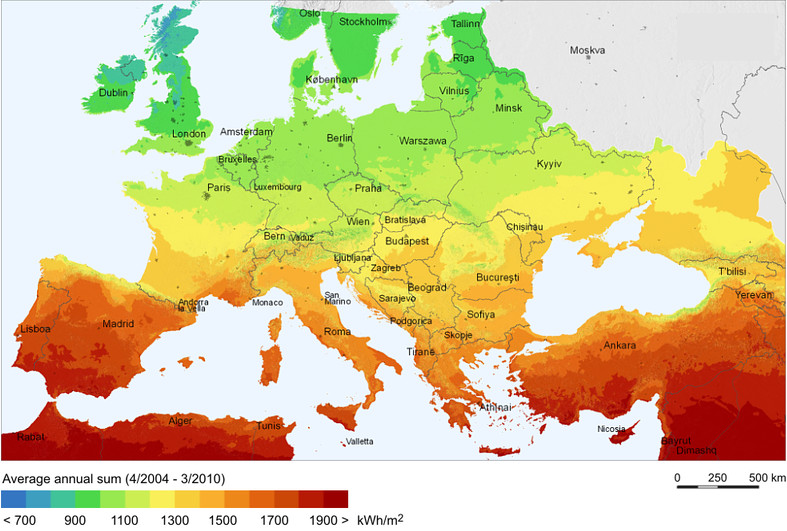 The 89,000 TW of sunlight reaching the Earth's surface is plentiful - almost 6,000 times more than the 15 TW equivalent of average power consumed by humans. Additionally, solar electric generation has the highest power density (global mean of 170 W/m²) among renewable energies. Solar power is pollution-free during use. Production end-wastes and emissions are manageable using existing pollution controls. End-of-use recycling technologies are under development and policies are being produced that encourage recycling from producers. PV installations can operate for many years with little maintenance or intervention after their initial set-up, so after the initial capital cost of building any solar power plant, operating costs are extremely low compared to existing power technologies.

As of 2011, the price of PV modules per MW has fallen by 60 percent since the summer of 2008, according to Bloomberg New Energy Finance estimates, putting solar power for the first time on a competitive footing with the retail price of electricity in a number of sunny countries. There has been fierce competition in the supply chain, and further improvements in the levelised cost of energy for solar lie ahead, posing a growing threat to the dominance of fossil fuel generation sources in the next few years. As time progresses, renewable energy technologies generally get cheaper, while fossil fuels generally get more expensive:The less solar power costs, the more favorably it compares to conventional power, and the more attractive it becomes to utilities and energy users around the globe. Utility-scale solar power can now be delivered in California at prices well below $100/MWh ($0.10/kWh) less than most other peak generators, even those running on low-cost natural gas.

Lower solar module costs also stimulate demand from consumer markets where the cost of solar compares very favorably to retail electric rates. When grid-connected, solar electric generation replaces some or all of the highest-cost electricity used during times of peak demand (in most climatic regions). This can reduce grid loading, and can eliminate the need for local battery power to provide for use in times of darkness. These features are enabled by net metering. Time-of-use net metering can be highly favorable, but requires newer electronic metering, which may still be impractical for some users.

Grid-connected solar electricity can be used locally thus reducing transmission/distribution losses (transmission losses in the US were approximately 7.2% in 1995). Compared to fossil and nuclear energy sources, very little research money has been invested in the development of solar cells, so there is considerable room for improvement. Nevertheless, experimental high efficiency solar cells already have efficiencies of over 40% in case of concentrating photovoltaic cells and efficiencies are rapidly rising while mass-production costs are rapidly falling.

Solar electricity is not produced at night and is greatly reduced in cloudy conditions requiring alternate sources of power. While many buildings with photovoltaic arrays are tied into the power grid which absorbs any excess electricity generated throughout the day and provides electricity in the evening, such systems use a grid tie inverter to convert direct current (DC) alternating current (AC) incurring an energy loss of 4-12%. Off-grid systems use either storage batteries which also incur significant energy losses and require regular maintenance or engine-generators which consume costly fuel. Solar electricity production depends on the limited power density of the location's insolation. Average daily output of a flat plate collector at latitude tilt in the contiguous US is 3-7 kilowatt h/m²/day and on average lower in Europe.

Solar electricity is more expensive than most other forms of small-scale alternative energy production. Without governments mandating "feed-in tariffs" for green solar energy, solar PV is less affordable to homeowners than solar hot water or solar space heating. Photovoltaic panels are specifically excluded in Europe from RoHS (Restriction on Hazardous Substances) since 2003 and were again excluded in 2011. California has largely adopted the RoHS standard through EWRA. Therefore, PV panels may legally in Europe and California contain lead, mercury and cadmium which are forbidden or restricted in all other electronics. Much of the investment in a home-mounted system may be lost if the home-owner moves and the buyer puts less value on the system than the seller.